Johana and Maxim Kroft on choosing a life of adventure and remote working before the world went into lockdown https://www.doggietalent.com/posts/johana-and-maxim-kroft-on-choosing-a-life-of-adventure-and-remote-working-before-the-world-went-into-lockdown/ https://i2.wp.com/www.doggietalent.com/wp-content/uploads/2020/05/a80b2f6192e8e5d019ddaf2fdd272368514e119e_840.jpg?fit=840%2C587&ssl=1 2020-05-27 51 UserPageVisits

Johana and Maxim Kroft on choosing a life of adventure and remote working before the world went into lockdown https://www.doggietalent.com/posts/johana-and-maxim-kroft-on-choosing-a-life-of-adventure-and-remote-working-before-the-world-went-into-lockdown/

On the verge of turning 30, Johana Kroft and her husband Maxim decided to get rid of all their stuff, become remote freelancers and travel the world, working as they go. It was supposed to be the adventure of a lifetime for the creative duo. A chance to meet new people and experience different cultures […]

On the verge of turning 30, Johana Kroft and her husband Maxim decided to get rid of all their stuff, become remote freelancers and travel the world, working as they go.

It was supposed to be the adventure of a lifetime for the creative duo. A chance to meet new people and experience different cultures but continue working for clients such as Google, Nike, Adidas and BBC under their studio, Idea & Maker.

However, recent events have disrupted their plans forever. With a fascinating story to share, we caught up with Johana and Maxim after they had just landed in Canada and the world began to shut down.

What prompted the adventure around the world?

Johana: A week after our wedding in 2017, my husband packed his old Macbook and flew to London to pick up keys for our one-bedroom apartment on Brick Lane. I followed him with our dog Panda a few weeks later with a van full of furniture and books. Crossed the English Channel on a ferry and that’s how our new life began.

We were talking about moving from Prague and travelling since we met. We just didn’t know where to go first. Eventually, we made a move to London because of the many opportunities in the design industry. We are both excited about animation and 3D, and London is where all the best people and studios are. And yeah, London is the right place to be for any ambitious young individual.

I’m grateful that we had this experience of living in the UK for two years. People are very supportive, they challenge you to do your best – and you can inhale the inspiration from the city as well. We started working as freelancers to meet as many people as possible and get loads of experience, too.

Maxim: Without this experience, we couldn’t take the next step. Sometimes we got remote gigs, and that gave us an idea of having a virtual studio Idea & Maker and working from anywhere around the world. We also wanted to work together, and studios are usually not looking for a duo of freelancers. That is why we started to search for our clients as a creative duo, and at the same time, we were selling all our stuff to become mobile.

Long story short, we sold everything. We bought laptops. We bought a car and drove first to Belgium, continued to Spain and France where we stayed for almost three months establishing relationships with two clients and working on the biggest projects of our life. 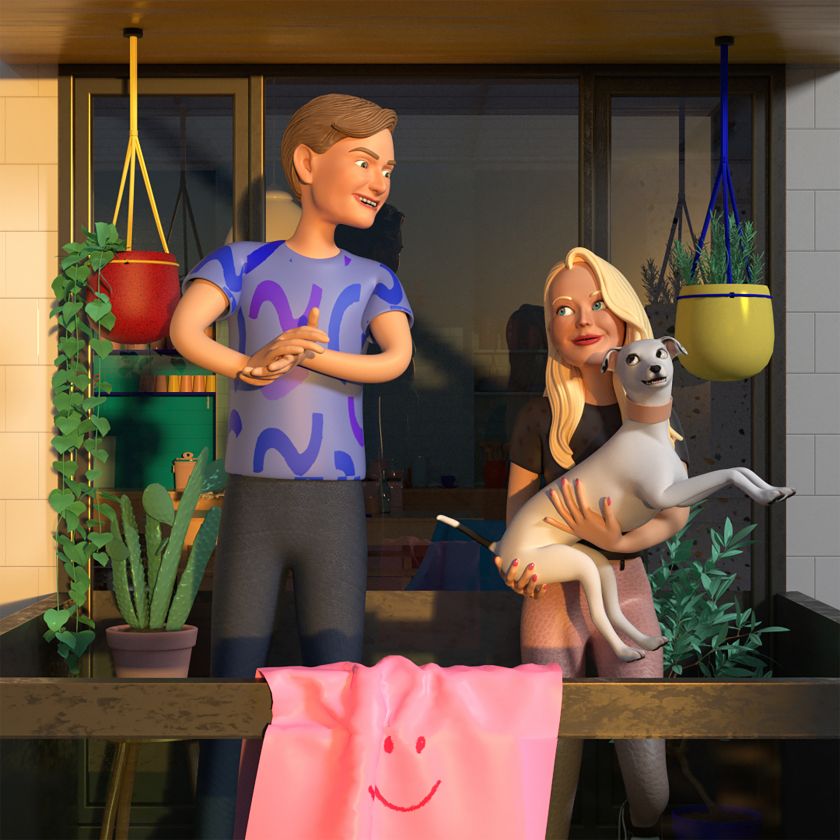 Johana: It was just the beginning of our trip as we had tickets for a transatlantic cruise from Southampton to New York. We needed to go back to the UK, sell our car and jump on a ship. It was the biggest adventure of our life! It took seven days across the Atlantic, and we arrived in Brooklyn early morning on 22 December. It was unreal! I will never forget seeing thousands of lights from the New York skyline and the magical sunrise. The city is incredibly photogenic.

We spent three beautiful months in New York: four weeks on Murray Hill and the rest in Brooklyn. We continued to work for clients through our London studio and had a fantastic opportunity to create a video installation for MET as part of its 150th anniversary. We were thrilled! It was an absolute pleasure to work for such a respected institution.

To get back to your question, I think we make our decisions based on instinct, logic and feelings. We don’t have a master plan that we follow; our choices are changing every few months, especially these days – it’s even weeks and days.

It must have felt so liberating selling stuff and becoming minimal?

Johana: It was terrifying, to be honest. We had an emotional connection to that stuff, especially our plants. But after we sold the first few items on Facebook, I felt relieved. I remember taking pictures of the furniture and clothes, and I thought this so mad – why am I doing this? Who is going to buy all this stuff? I love my stuff! I don’t want to sell anything!

But you know what, when you see people that are genuinely happy to get something nice for a reasonable price, and you’ve got some money in your pocket, it naturally makes sense. I felt liberated and excited to start over with just a few bags. And the great thing is that we used money from selling our stuff to do that.

Is it essential life is an adventure to you?

Johana: Super important, yes. I always have to step outside of my comfort zone and look for a little adventure, so I don’t get stuck in one place. It’s essential in my work – you usually find short stories from my life. The more I travel, the more I notice details, understand people and cultures and know more about the world. For me, it’s important not to get comfortable in a social bubble and always see things from a different perspective.

I love fresh starts, building everything from scratch, connecting with new friends, exploring all those beautiful cities, spending every month in a different apartment. My life is now a huge adventure, but I would never live like this without my partner, best friend, and the love of my life – my husband, Maxim.

Where do you stay during your travels?

Maxim: We’ve basically switched about 10 Airbnb’s over the last six months. When we need to stay somewhere for a couple of days, then we stay in a hotel. Altogether we’ve lived in 15 different places over this half-year. One of them was a week-long cruise over the Atlantic Ocean! That one was definitely something.

Johana: I grew up in a musical family, and my parents thought that I was born to continue in the tradition, playing the violin. But I hated that so much! I wanted to be a director or artist. My parents were pretty disappointed, but they decided not to push me in that direction. I was so happy that I could finally be a director.

Since my parents divorced, I haven’t seen my father that much. As an orchestral violinist, he travelled a lot to places like Tokyo, New York, Hong Kong, Moscow, Sydney, London, and everywhere around Europe. He always had a bunch of funny stories from the trips. I knew that I wanted to travel and tell stories as well.

Maxim: I was on the move since I was born. My parents were moving all the time when I was little. I remember living in at least 10 different places before I settled with my mother in Prague at aged 14. 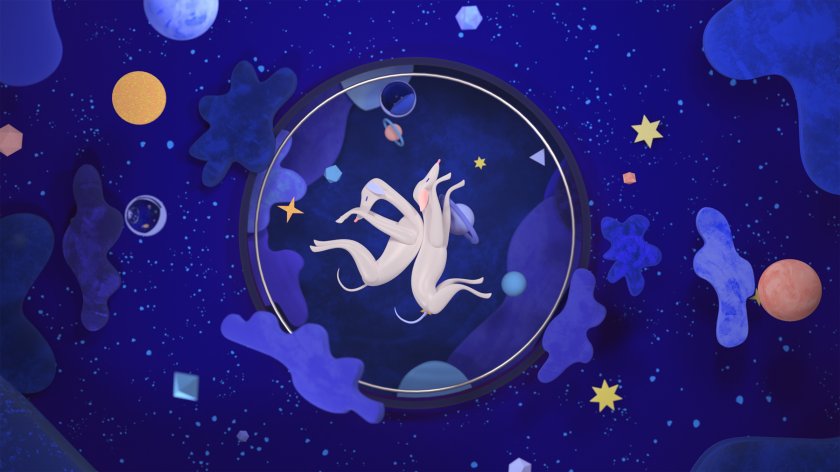 So you’re working and earning as you go. How do you make it happen?

Johana: We needed to become producers in our studio and manage and plan every day to keep the work going. As we don’t have standard nine-to-five working hours, we can more or less work based on the schedule.

Without proper planning, it could get very intense, a few months ago we had three projects delivering on the same day. In situations like this, we collaborate with freelancers to expand our studio temporarily and handle the workload. So I might be a motion designer on a project, producer on the other, and director on the third.

On the other hand, right now we are collaborating with LA tech startup Emerge on something exciting, so we are keeping just one project in-house and focusing only on that.

How do you stay productive?

Maxim: Travelling keeps us busy as we need to plan everything constantly, and also meet tight deadlines. I’m making tasks for myself on post-its and finishing them. It’s great to keep track of what needs to be done somewhere else than your head where it could get lost in thoughts. 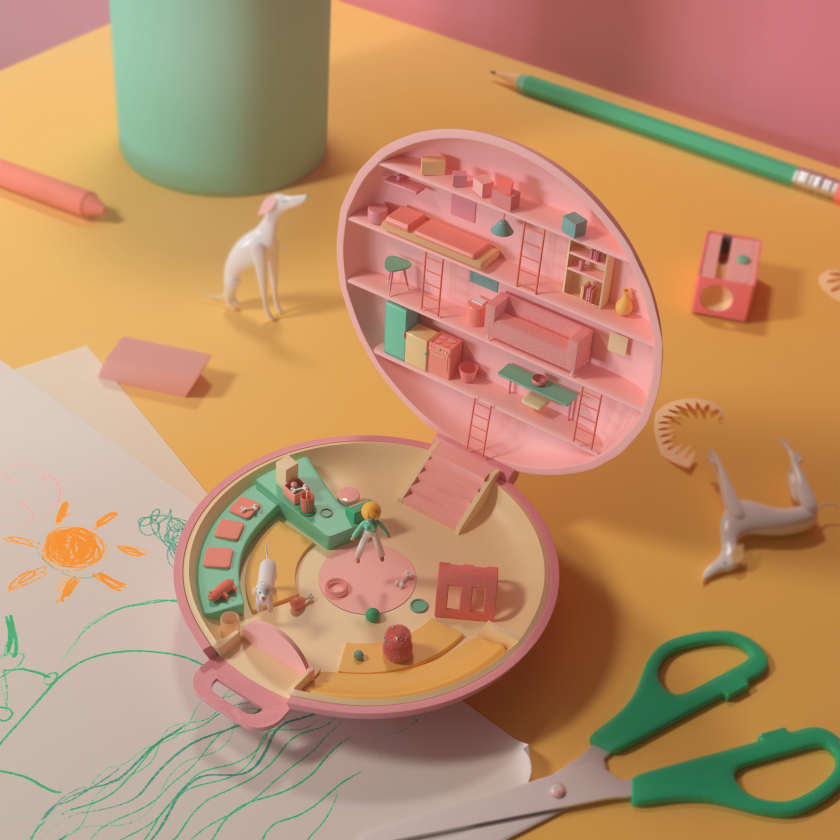 Where are you now, and how are you coping with the current situation?

Johana: In Vancouver, we needed to stay 14 days in quarantine, which we did, and it was the right thing to do because we were exposed to a lot of people at the airports and taking taxis. This was just before Canada closed its borders and the US went into lockdown. We watched the news about what was happening in Prague, London, New York and Vancouver, and it was terrifying. Especially when you think how many people might lose their jobs.

I think it’s important to support local businesses as most of them are doing takeaways or letting few people inside the shop and keeping social distance. Of course, at the same time, you need to follow the rules and be considerate to the people around you.

Travelling comes with a lot of challenges. You always need to think of every possible situation, search for a lot of information and act abruptly if something happens. Leaving New York we needed to reschedule our flight a few days earlier.

I remember checking the news on Monday morning and finding out that Canada was to close its borders. I started packing at that very moment; my husband took a taxi to the airport immediately because it was impossible to connect with the airline on the phone. After six hours we were sitting in the aeroplane taking the last flight to Toronto. 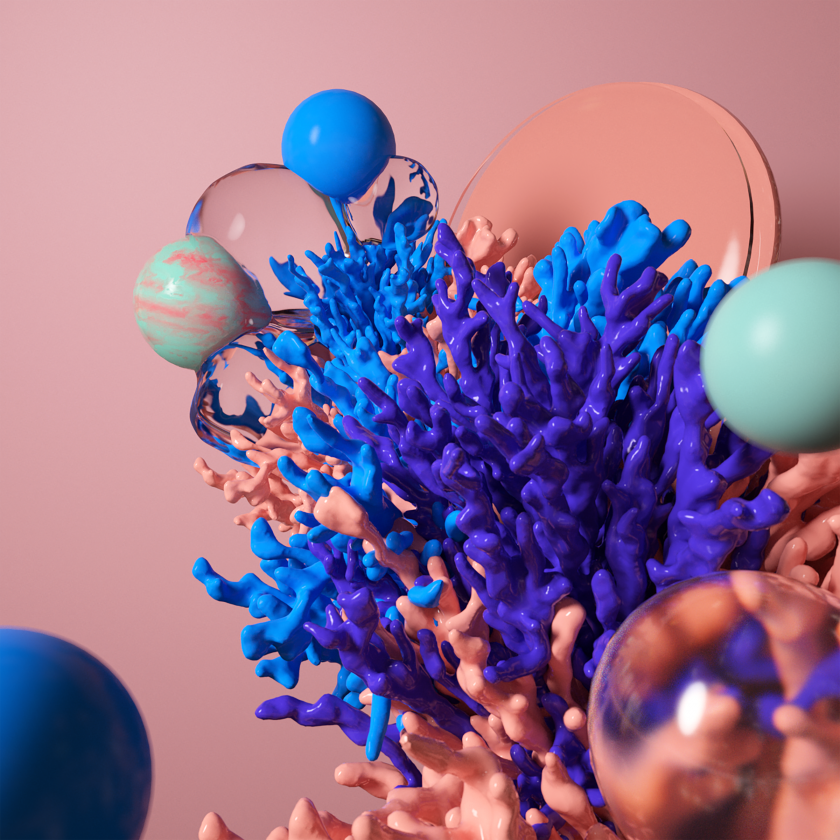 Aside from the current crisis, have there been any other challenges you’ve faced and overcome?

Maxim: Of course. Running a studio comes with a lot of decision making and responsibilities. It’s overwhelming and many times you’ll find yourself on the edge of a mental breakdown or burnout. It’s very hard to fight those crises for any creative person. But it gets easier over time, just don’t give up, find your inner peace and learn from those experiences.

Has the pandemic changed your plans in any way?

Johana: Unfortunately yes. We applied for visas to the US, but immigration is closed for all applicants, and it’s complicated to travel back to Europe as we have our dog with us. We can stay in Vancouver until September, hopefully longer, because we applied to extend our stay here. But it’s nothing compared to other people that are in much worse situations right now.

Maxim: Being not able to travel is painful, of course, because we have no idea when we see our family again – but that’s the life we’ve chosen. I think the pandemic has shown us what is essential in our lives.

Do you think you’ll go home after everything returns to “normal”?

Maxim: Right now it’s hard to tell what will happen with the travel industry as it is affected the most by the crisis. We were and still are searching for our “home” no matter what’s the situation like at the moment. Adjusting our plans is almost impossible under current circumstances. We’d love to see our family, especially now, but we just don’t know if that will be possible.

FREE MEMBERSHIP TO EARN MONEY
PHZpZGVvIGlkPSJwMnNfaW50cm8iIGNsYXNzPSJ2aWRlby1qcyB2anMtZGVmYXVsdC1za2luIiBjb250cm9scyB3aWR0aD0iMTAwJSIgaGVpZ2h0PSIxMDAlIiBwb3N0ZXI9Imh0dHA6Ly9wMnNwcm9tb3Rpb24uY29tL21vdmllcy9wcmVsb2FkX2hvbGRlcl83NDAucG5nIiBwcmVsb2FkPSJub25lIiBhdXRvcGxheT4NCgkJICA8c291cmNlIHR5cGU9InZpZGVvL21wNCIgc3JjPSJodHRwOi8vcDJzcHJvbW90aW9uLmNvbS9yZWZlcnJhbHMvbW92aWVzL3Ayc19pbnRyby5tcDQiPg0KCQkgIDxzb3VyY2UgdHlwZT0idmlkZW8vd2VibSIgc3JjPSJodHRwOi8vcDJzcHJvbW90aW9uLmNvbS9yZWZlcnJhbHMvbW92aWVzL3Ayc19pbnRyby53ZWJtIj4NCgkJPC92aWRlbz4NCgkJPC9kaXY+
Sign up to get started to earning income. Your privacy is protected.
×
▶